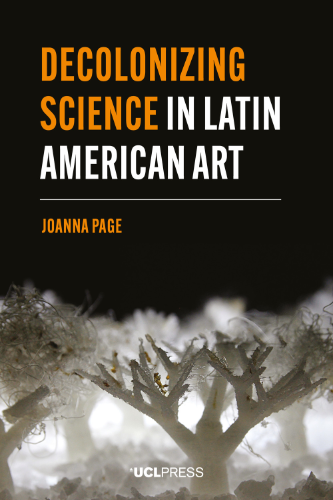 Projects that bring the ‘hard’ sciences into art are increasingly being exhibited in galleries and museums across the world. In a surge of publications on the subject, few focus on regions beyond Europe and the Anglophone world. Decolonizing Science in Latin American Art assembles a new corpus of art-science projects by Latin American artists, ranging from big-budget collaborations with NASA and MIT to homegrown experiments in artists’ kitchens.

While they draw on recent scientific research, these art projects also ‘decolonize’ science. If increasing knowledge of the natural world has often gone hand-in-hand with our objectification and exploitation of it, the artists studied here emphasize the subjectivity and intelligence of other species, staging new forms of collaboration and co-creativity beyond the human. They design technologies that work with organic processes to promote the health of ecosystems, and seek alternatives to the logics of extractivism and monoculture farming that have caused extensive ecological damage in Latin America. They develop do-it-yourself, open-source, commons-based practices for sharing creative and intellectual property. They establish critical dialogues between Western science and indigenous thought, reconnecting a disembedded, abstracted form of knowledge with the cultural, social, spiritual, and ethical spheres of experience from which it has often been excluded.

Decolonizing Science in Latin American Art interrogates how artistic practices may communicate, extend, supplement, and challenge scientific ideas. At the same time, it explores broader questions in the field of art, including the relationship between knowledge, care, and curation; nonhuman agency; art and utility; and changing approaches to participation. It also highlights important contributions by Latin American thinkers to themes of global significance, including the Anthropocene, climate change and environmental justice.