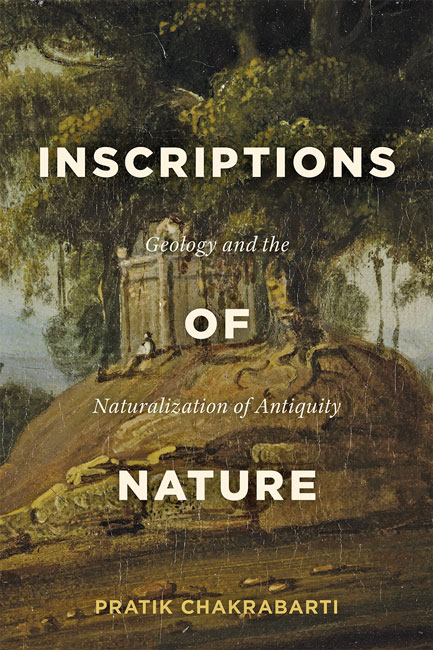 Pratik Chakrabarti, chair in the history of science and medicine and director of the Centre for the History of Science, Medicine, and Technology at the University of Manchester, will present his new book Inscriptions of Nature: Geology and the Naturalization of Antiquity (Johns Hopkins University Press, 2020) in the Greenhouse book talk series on Monday, 8 March 2021, 16:00 Central European time.

Join us on Zoom.

In Inscriptions of Nature, Chakrabarti argues that, in both the real and the metaphorical digging of the earth, the deep history of nature, landscape, and people became indelibly inscribed in the study and imagination of antiquity. The first book to situate deep history as an expression of political, economic, and cultural power, this volume shows that it is complicit in the European and colonial appropriation of global nature, commodities, temporalities, and myths. The book also provides a new interpretation of the relationship between nature and history. Arguing that the deep history of the earth became pervasive within historical imaginations of monuments, communities, and territories in the nineteenth century, Chakrabarti studies these processes in the Indian subcontinent, from the banks of the Yamuna and Ganga rivers to the Himalayas to the deep ravines and forests of central India. He also examines associated themes of Hindu antiquarianism, sacred geographies, and tribal aboriginality.

Based on extensive archival research, the book provides insights into state formation, mining of natural resources, and the creation of national topographies. Driven by the geological imagination of India as well as its landscape, people, past, and destiny, Inscriptions of Nature reveals how human evolution, myths, aboriginality, and colonial state formation fundamentally defined Indian antiquity.