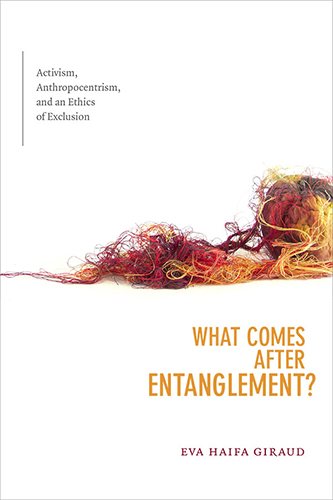 By foregrounding the ways that human existence is bound together with the lives of other entities, contemporary cultural theorists have sought to move beyond an anthropocentric worldview. Yet as Eva Haifa Giraud contends in What Comes after Entanglement?, for all their conceptual power in implicating humans in ecologically damaging practices, these theories can undermine scope for political action. Drawing inspiration from activist projects between the 1980s and the present that range from anticapitalist media experiments and vegan food activism to social media campaigns against animal research, Giraud explores possibilities for action while fleshing out the tensions between theory and practice. Rather than an activist ethics based solely on relationality and entanglement, Giraud calls for what she describes as an ethics of exclusion, which would attend to the entities, practices, and ways of being that are foreclosed when other entangled realities are realized. Such an ethics of exclusion emphasizes foreclosures in the context of human entanglement in order to foster the conditions for people to create meaningful political change.