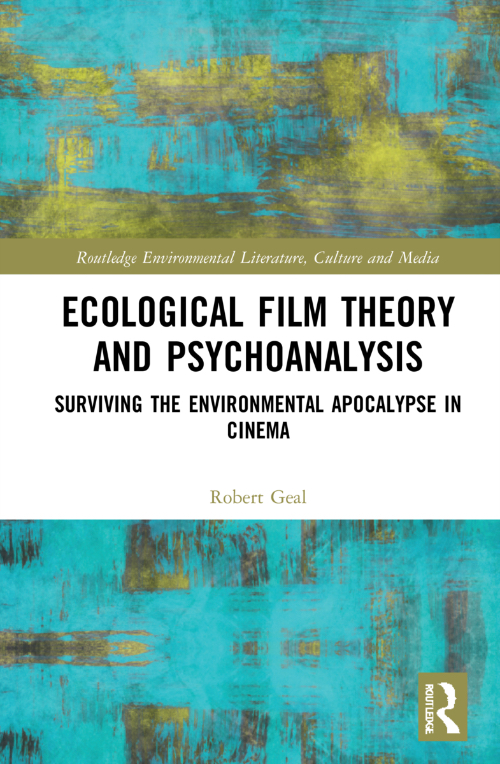 Robert Geal, Lecturer in Film and Television Studies at the University of Wolverhampton (UK), discussed his book Ecological Film Theory and Psychoanalysis: Surviving the Environmental Apocalypse in Cinema (Routledge 2021) in the Greenhouse environmental humanities book talk series on Monday, 13 September 2021, at 16:00 in Norway.

This book applies ecolinguistics and psychoanalysis to explore how films fictionalising environmental disasters provide spectacular warnings against the dangers of environmental apocalypse, while highlighting that even these apparently environmentally friendly films can still facilitate problematic real-world changes in how people treat the environment.

Ecological Film Theory and Psychoanalysis argues that these films exploit cinema’s inherent Cartesian grammar to construct texts in which not only small groups of protagonist survivors, but also vicarious spectators, pleasurably transcend the fictionalised destruction. The ideological nature of the ‘lifeboats’ on which these survivors escape, moreover, is accompanied by additional elements that constitute contemporary Cartesian subjectivity, such as class and gender binaries, restored nuclear families, individual as opposed to social responsibilities for disasters, and so on. The book conducts extensive analyses of these processes, before considering alternative forms of filmmaking that might avoid the dangers of this existing form of storytelling. The book’s new ecosophy and film theory establishes that Cartesian subjectivity is an environmentally destructive ‘symptom’ that everyday linguistic activities like watching films reinforce.