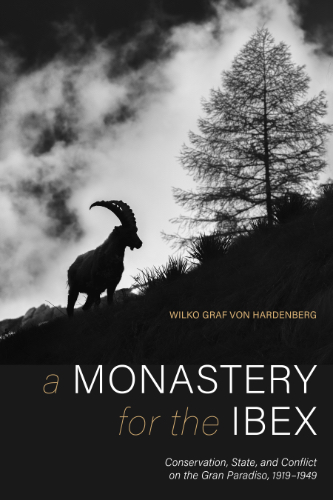 Wilko Graf von Hardenberg, senior research scholar at the Max Planck Institute for the History of Science in Berlin, will present his book A Monastery for the Ibex: Conservation, State, and Conflict on the Gran Paradiso, 1919-1949 (University of Pittsburgh Press, 2021) in the Greenhouse series on Monday, 4 October 2021, 16:00 Central European time.

Gran Paradiso National Park is Italy’s oldest, and was instrumental in preventing the extinction of the Alpine ibex between World War I and just after World War II. Today, there are more than 30,000 ibex living in the Alps, all of which descended from that last colony protected in Gran Paradiso under Mussolini’s rule. Wilko Graf von Hardenberg merges the history of conservation with the area’s social history and Italy’s larger political history to produce a multifaceted narrative about the park as an institution, the conflicts it triggered, and practices adopted to manage the ibex despite hurdles placed by the fascist regime. The book’s central argument is that, in fascist Italy, preservation—propaganda notwithstanding—was a product of the regime’s continuities with the previous liberal system. Italy’s total fascist transformation, accomplished only more than a decade after Mussolini took power, virtually unmade the early successes of preservation set in place by the nascent “nature state” in the regime’s early years. Despite this conflict, conservationists succeeded in preserving the ibex. Hardenberg positions this success within the broader history of science, conservation, and tourism in fascist Italy and the Alpine region, creating a comprehensive historical background and comparative reference to ongoing debates about the role of nature conservation in general and in relation to the state and its agencies.