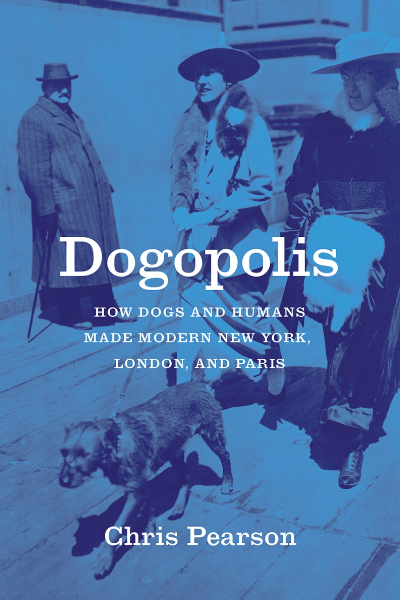 Chris Pearson, Senior Lecturer in Twentieth-Century History at University of Liverpool (UK), discussed his book Dogopolis: How Dogs and Humans Made Modern New York, London, and Paris (University of Chicago Press, 2021) in the Greenhouse environmental humanities book talk series on Monday, January 17, 2022, at 16:00 in Norway (15:00 in UK).

Stroll through any American or European city today and you probably won’t get far before seeing a dog being taken for a walk. It’s expected that these domesticated animals can easily navigate sidewalks, streets, and other foundational elements of our built environment. But what if our cities were actually shaped in response to dogs more than we ever realized?

Chris Pearson’s Dogopolis boldly and convincingly asserts that human-canine relations were a crucial factor in the formation of modern urban living. Focusing on New York, London, and Paris from the early nineteenth century into the 1930s, Pearson shows that human reactions to dogs significantly remolded them and other contemporary western cities. It’s an unalterable fact that dogs—often filthy, bellicose, and sometimes off-putting—run away, spread rabies, defecate, and breed wherever they like, so as dogs became a more and more common in nineteenth-century middle-class life, cities had to respond to people’s fear of them and revulsion at their least desirable traits. The gradual integration of dogs into city life centered on disgust at dirt, fear of crime and vagrancy, and the promotion of humanitarian sentiments. On the other hand, dogs are some people’s most beloved animal companions, and human compassion and affection for pets and strays were equally powerful forces in shaping urban modernity. Dogopolis details the complex interrelations among emotions, sentiment, and the ways we manifest our feelings toward what we love—showing that together they can actually reshape society.