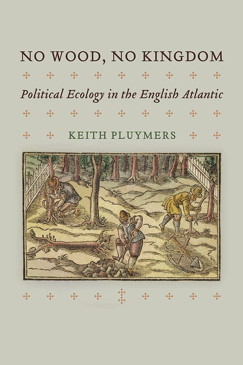 Keith Pluymers, Assistant Professor of History at Illinois State University, discussed his book No Wood, No Kingdom: Political Ecology in the English Atlantic (University of Pennsylvania Press, 2021) in the Greenhouse environmental humanities book talk series on Monday, 23 May 2022, at 16:00 Central European time (10am Eastern).

In early modern England, wood scarcity was a widespread concern. Royal officials, artisans, and common people expressed their fears in laws, petitions, and pamphlets, in which they debated the severity of the problem, speculated on its origins, and proposed solutions to it. No Wood, No Kingdom explores these conflicting attempts to understand the problem of scarcity and demonstrates how these ideas shaped land use, forestry, and the economic vision of England’s earliest colonies.

Popular accounts have often suggested that deforestation served as a “push” for English colonial expansion. Keith Pluymers shows that wood scarcity in England, rather than a problem of absolute supply and demand, resulted from social conflict over the right to define and regulate resources, difficulties obtaining accurate information, and competing visions for trade, forestry, and the English landscape. Domestic scarcity claims did encourage schemes to develop wood-dependent enterprises in the colonies, but in practice colonies competed with domestic enterprises rather than supplanting them. Moreover, close studies of colonial governments and the actions of individual landholders in Ireland, Virginia, Bermuda, and Barbados demonstrate that colonists experimented with different, often competing approaches to colonial woods and trees, including efforts to manage them as long-term resources, albeit ones that nonetheless brought significant transformations to the land.