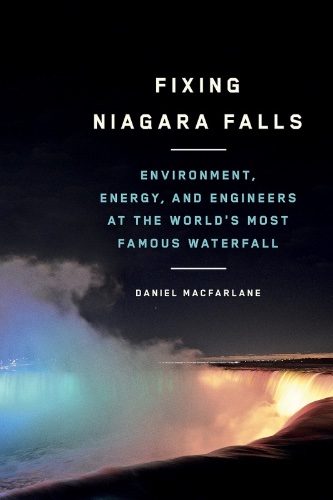 On Monday, August 31st at 16:00 CET, Daniel Macfarlane, Associate Professor in the Institute of the Environment and Sustainability at Western Michigan University (USA), launched his book Fixing Niagara Falls: Environment, Energy and Engineers at the World’s Most Famous Waterfall (UBC Press, 2020) which comes out in September in our Greenhouse online environmental humanities book talk series.

Since the late nineteenth century, Niagara Falls has been heavily engineered to generate energy behind a flowing façade designed to appeal to tourists. Essentially, this natural wonder is now a tap: huge tunnels channel the waters of the Niagara River around the Falls, which ebb and flow according to the tourism calendar.

Fixing Niagara Falls reveals the technological feats and cross-border politics that facilitated the transformation of one of the most important natural sites in North America. Daniel Macfarlane details how engineers, bureaucrats, and politicians conspired to manipulate the world’s most famous waterfall. During the first half of the twentieth century, the United States and Canada explored various ways to maximize hydropower from the Niagara River while “preserving” the Falls. Decades of environmental diplomacy and transborder studies led to a 1950 treaty that allowed new hydro-electric stations to funnel most of the river’s water to generate power. To facilitate these diversions and lessen the visual impact of redirecting so much water, the two nations cooperated to install a range of control works while reshaping and shrinking the Horseshoe Falls.