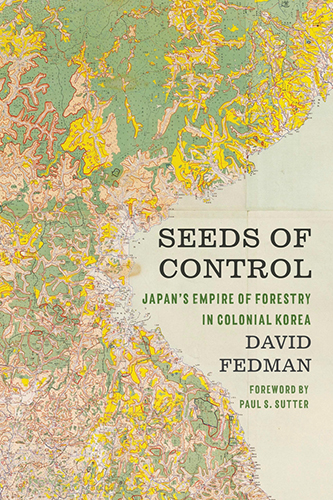 David Fedman, Assistant Professor of history at the University of California, Irvine (USA), discussed his book Seeds of Control: Japan’s Empire of Forestry in Colonial Korea (University of Washington Press, 2020) in our Greenhouse online book talk series on Monday, 1 June, 16:00 Central European time. The book is officially published on 1 July, so this is a great opportunity to get a sneak peek at its contents!

Japanese colonial rule in Korea (1905–1945) ushered in natural resource management programs that profoundly altered access to and ownership of the peninsula’s extensive mountains and forests. Under the banner of “forest love,” the colonial government set out to restructure the rhythms and routines of agrarian life, targeting everything from home heating to food preparation. Timber industrialists, meanwhile, channeled Korea’s forest resources into supply chains that grew in tandem with Japan’s imperial sphere. These mechanisms of resource control were only fortified after 1937, when the peninsula and its forests were mobilized for total war.

In this wide-ranging study David Fedman explores Japanese imperialism through the lens of forest conservation in colonial Korea—a project of environmental rule that outlived the empire itself. Holding up for scrutiny the notion of conservation, Seeds of Control examines the roots of Japanese ideas about the Korean landscape, as well as the consequences and aftermath of Japanese approaches to Korea’s “greenification.” Drawing from sources in Japanese and Korean, Fedman writes colonized lands into Japanese environmental history, revealing a largely untold story of green imperialism in Asia.