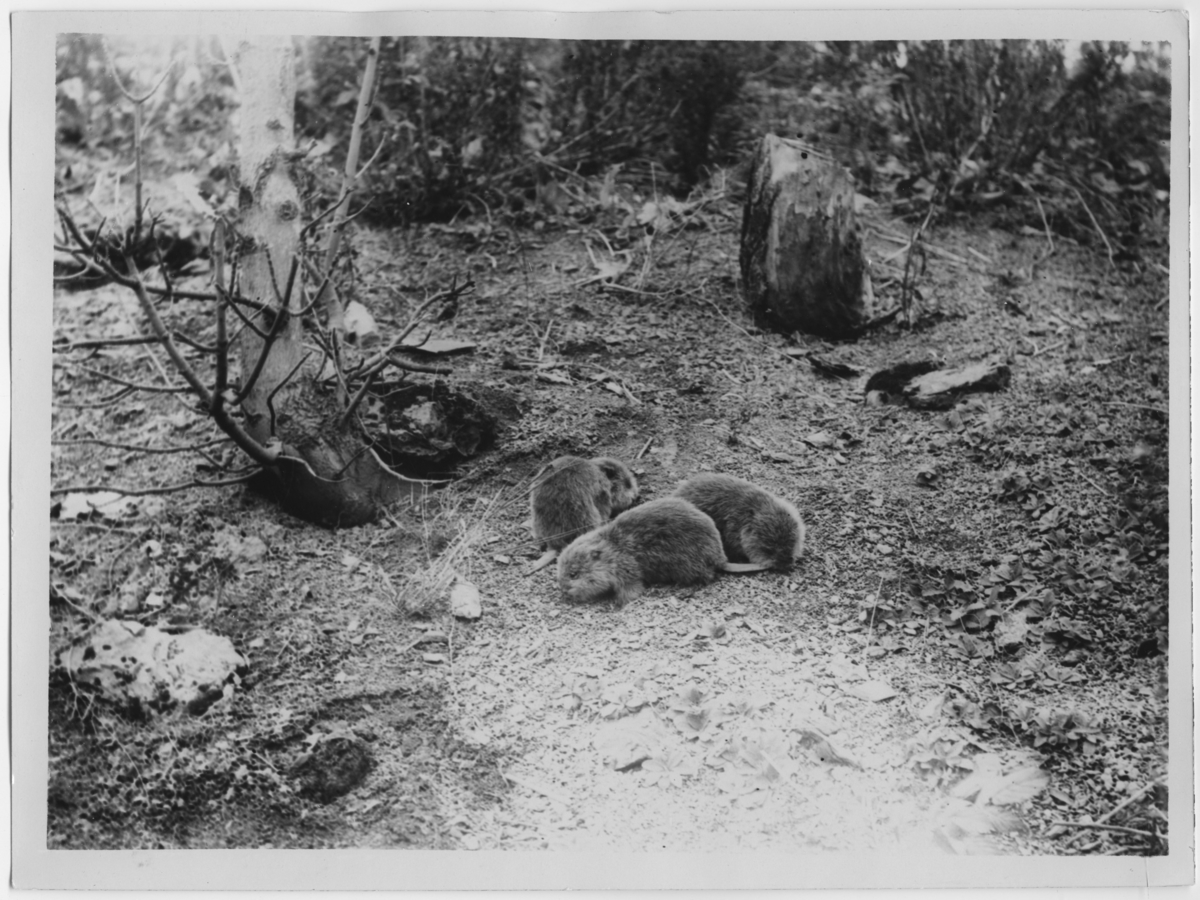 A digital exhibition titled The Beaver’s Journey: From Disappearance to Recovery has been launched on the cultural heritage platform Europeana by the ‘Beyond Dodos and Dinosaurs’ project. This is the first Europeana exhibit curated by a Norwegian-based team.

The exhibition chronicles the history of the reintroduction of beavers in Scandinavia in the early 1900s. 2021 marks the 100-year anniversary of the first time beavers were caught in Norway to be set out in Sweden where they had become extinct.

See the press releases in English or Norwegian.

Extinction of non-human species caused by our human activities has become one of the central concerns of modern environmentalism; at the same time, we are witnessing the widespread extinction of indigenous cultures and languages. Although discussions of potential (but not yet realized) extinction are animated by an “endangerment sensibility” which works to preserve the threatened object or being (Vidal and Dias 2016), once the species or culture or language is extinct, the discourse must shift. Extinction studies scholars have argued that scholars have a moral and ethical responsibility to expose how extinction affects us now and in the future and find new ways of living that recognises that the loss of species is connected to colonial structures in human-nonhuman as well as human-human relations (Rose, van Dooren, and Chrulew 2017). Greater input is urgently needed from arts and humanities to work critically engage with the scientific discourses about extinction.

Museums have been called upon in the last few years to educate and inspire action on grand challenges such as climate change (Cameron and Neilson 2015; Newell, Robin, and Wehner 2016). In the same vein, they have the opportunity to be primary sites of public engagement with extinction. A number of local and national museums have responded with educational exhibitions focusing on modern species extinction, such as Extinction or Survival? Manchester Museum 2016-17; Extinct: a Way of Life, York Museum 2017; Extinction: Not the End of the World? London Natural History Museum, 2013. Others have incorporated concerns about modern extinction alongside the planetary of the dinosaurs, such as Deep Time opened at the Smithsonian Natural History Museum in 2019. These examples show that the time is ripe to analyse the positioning and ethics of extinction as an exhibitable phenomenon.

This special issue calls for critical reflection on how museums have been and can be used to cultivate reflective thinking about extinction. It is open for scholarship on the roles of museums in exhibiting the loss of nonhuman species and/or the loss of human cultures/languages that results from the extinction of nonhumans. The special issue welcomes papers on these topics:

Potential authors are encouraged to submit an abstract that will be reviewed by the special issue editor. Authors will then be invited to submit a full manuscript and all submissions will be subject to a peer review process.

Please submit an abstract of approximately 300 words by 16 October 2020 to dolly.jorgensen@uis.no.  You will be notified by 23 October 2020 if your paper is accepted for submission.

Manuscript length should be between 5,000 and 8,000 words, following the journal guidelines, and must be submitted by 15 March 2021.

Manuscripts will then be sent to peer review, and papers invited for a ‘revise and resubmit’ will be due in mid-2021. The special issue will be published in July 2022. 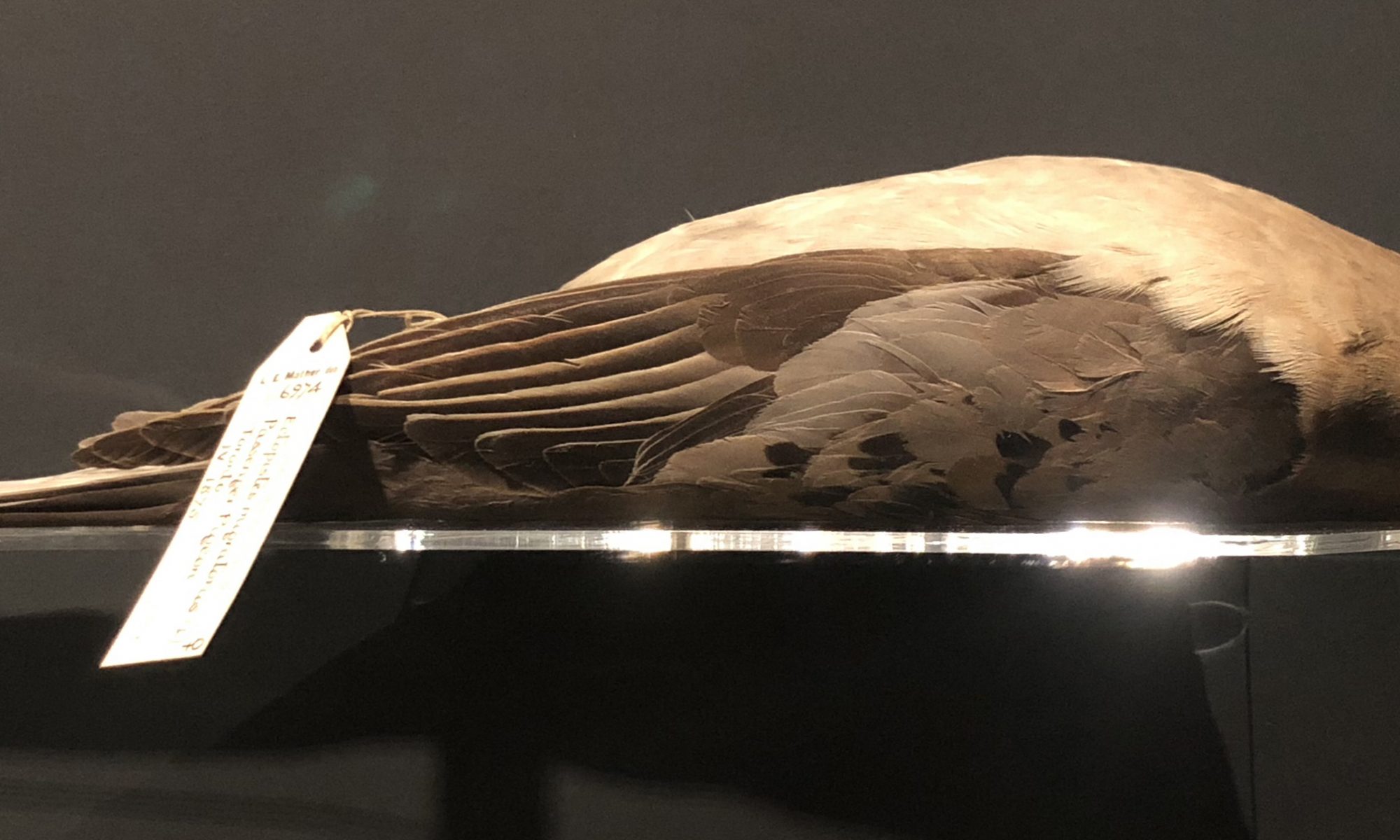 Extinction in Public, A Symposium at Manchester Museum, October 15–16, 2020

What do we talk about when we talk about extinction? As a concept, a process, and a specific event, as something troublingly natural and social, as both an observable but mostly unrecorded phenomenon, “extinction” carries competing and contradictory meanings. Yet in the current conjuncture, extinction operates as an emergent keyword of public life. Charged with new immediacy by the cascading effects of climate collapse, mobilised by the collective power of street movements such as Extinction Rebellion and Ende Gelände, and theorised by the nonhuman turns of the environmental humanities, Anthropocene, and multispecies studies, extinction can no longer be contained within the cabinets of natural history museums – if indeed it ever could.

But extinction means different things to different publics. It is a polysemous concept, even slippery. For some, extinction denotes an explicitly human concern and provokes a species-level apocalyptic image of the end of humanity. For others, extinction is more closely associated with the slow passing of charismatic nonhuman animals, conjured evocatively in the image of the endling. The Sixth Mass Extinction Event is itself overwhelming in its valences, not just because it invokes a staggering loss of fungal, plant and animal wildlife, and not just because it comprises an equally staggering loss of indigenous languages, cultures and practices. It is overwhelming, too, because it calls on “us” to think carefully about “our” own complicities and contributions to its continuation, without ever losing sight of the vastly unequal social relations which produce its globally uneven and differentiated impacts.

At the same time, extinction remains elusive and contested. Although the IUCN Red List is forever developing its catalogue, the statistics of extinction vary, and most individual species extinctions remain unrecorded and unknown. Although the predominant signifiers of extinction are still associated with polar bears and whales, it is in fact invertebrates that bear the brunt of anthropogenic impacts. And although many see global heating of 2°C as the ecological tipping point for the planet, indigenous peoples have long understood that “we” have already crossed a “relational tipping point”, as Kyle Powys Whyte suggests. Settler colonialism and capitalist modes of production have broken cross- species kin relationships that were previously foundational to planetary stewardship.

This symposium aims to develop critical perspectives on the sixth extinction. By adopting the title Extinction in Public, we mean to draw attention to and critically reflect on the ways in which extinction – in all of its contradictory meanings – is currently being made public. What is at stake in making public the Sixth Mass Extinction Event? Which publics are engaging with extinction? And what does it mean to them? By hosting this symposium in Manchester Museum, a museum that is exploring its own role in communicating

extinction to different audiences, we especially want to interrogate the relationship between public institutions, public participation, and anthropogenic extinctions, opening up new ways of thinking extinction in the museum space.

We seek abstracts which intervene in the discourse of extinction. We welcome papers which engage directly with the following concerns, but we are also open to hearing about projects which approach extinction in other ways.

In an effort to support and develop more sustainable academic practices, this symposium is a “No Fly” conference. Our budget will cover (within reason) contributors’ subsistence, accommodation and land-based travel to and from Manchester. We welcome remote participation, and will endeavour to make digital conversations a meaningful part of the symposium.

Dominic O’Key, post-doctoral research fellow with the University of Leeds team on the EXTINCT project, has published a new article proposing that the novel Pterodactyl, Puran Sahay, and Pirtha by Mahasweta Devi works through literary de-extinction, which he defines as “any creative attempt to reimagine extinct species within the here and now a text’s narrative time.” Read his article here.

The decline of wild species and the increase in domesticated ones is fun- damentally an agricultural issue, and this is where agricultural history comes into play. If humans are to create futures for threatened species different than those projected by the IPBES report, we need to understand how our present extinction situation is tied to long-term patterns of agricultural production and consumption. Agricultural historians are perfectly positioned to analyze these linkages between food production and biodiversity destruction, especially in light of the ongoing work by agricultural historians to explicitly engage with environmental issues in conjunction with the much younger field of environmental history.

You can read the entire roundtable here. 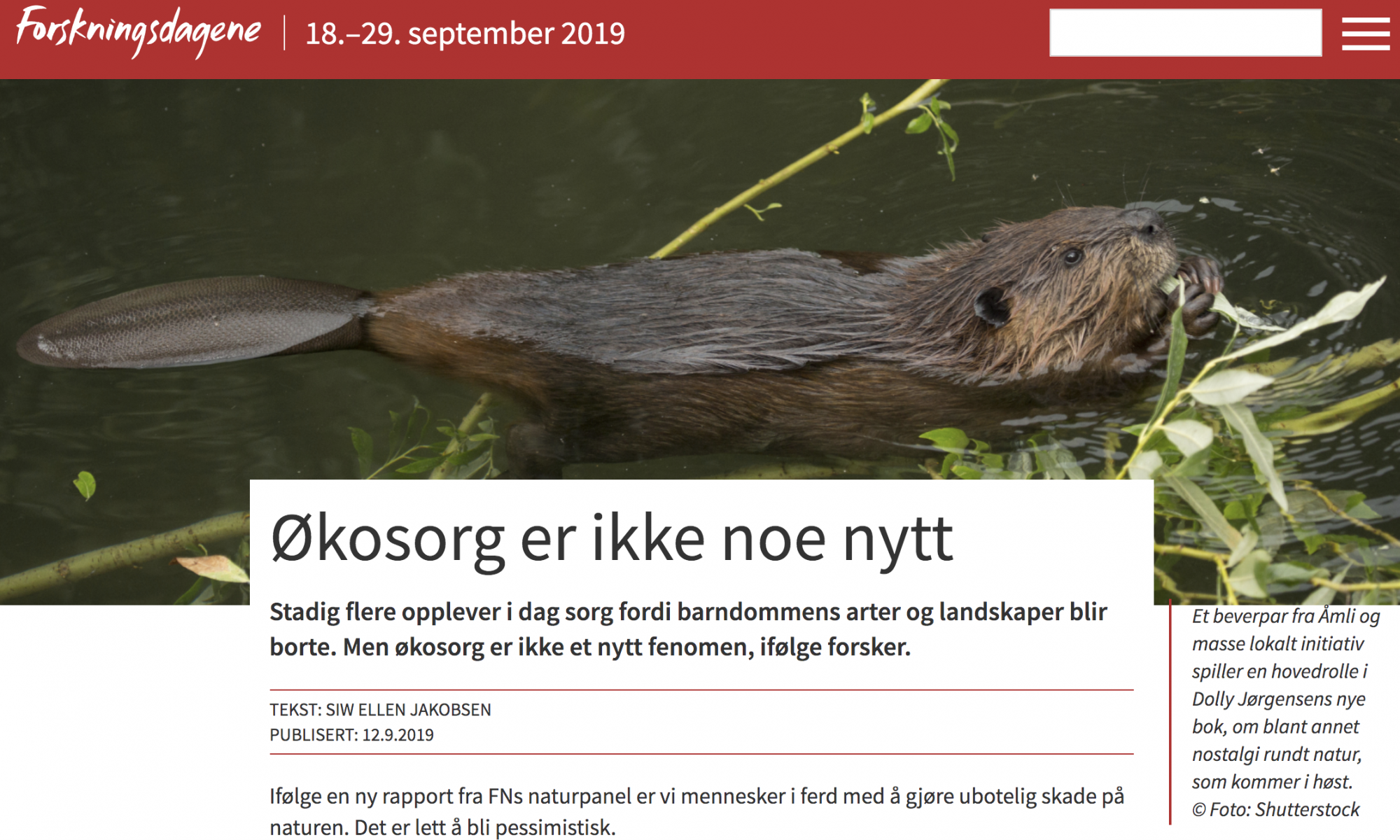 PI Dolly Jørgensen’s research on the emotions tied to extinction and attempts to bring back species like the beaver was featured in two articles published in September 2019.

The Beyond Dodos and Dinosaurs team has expanded.

Gitte Westergaard joined the team as a PhD student in February 2019. She will be working on her PhD dissertation, tentatively titled An Exploration of Island Extinction through Museum Collections: Towards a Decolonization of Animal Remains through January 2023. Her case studies include endangered lemurs collected by missionaries to Madagascar, tortoises considered the last of their kind on display, cultural artefacts made out of feathers from the extinct Hawaiian ʻōʻō bird, and endemic and invasive rats in the Caribbean. Gitte earned her Masters degree in Sustainable Heritage Management from Aarhus University in 2018.

Verity Burke joins the team in October 2019 as a postdoctoral research fellow for two years. She has a PhD in English Literature from University of Reading (2018). She is currently a postdoc on the AHRC-funded project “Narrativising Dinosaurs: Science and Popular Culture from 1850 – present” at University of Birmingham. She will be focusing her studies for this project on two exhibits at the Natural History Museum (London).

A paid position to work on a PhD in environmental humanities at the University of Stavanger is available in conjunction with the “Beyond Dodos and Dinosaurs” project. The appointment is for three years and the PhD thesis will be written in English. The application deadline is September 30, 2018. 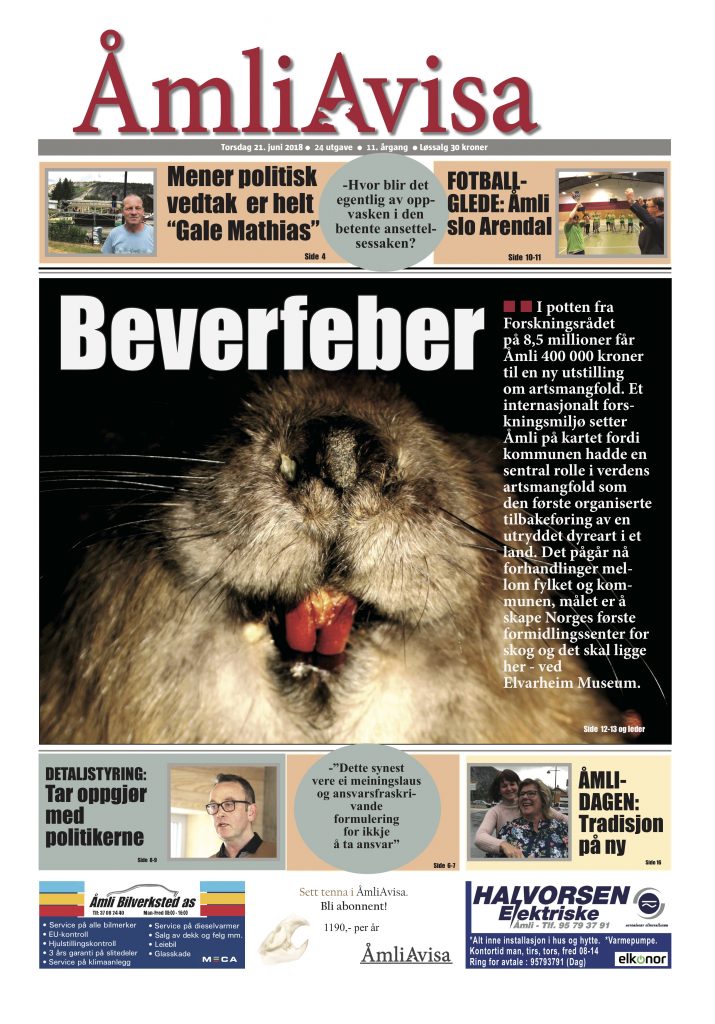 The local Åmli newspaper, ÅmliAvisa, has excitedly shared the news about the funding of through the “Beyond Dodos and Dinosaurs” and “Extinction as Cultural Heritage?” projects.Elvarheim museum will host an exhibit, “The Beaver’s Journey” on the capture of beavers in Åmli in 1921 that were reintroduced for the first time in Sweden in 1922. Åmli’s town shield features a beaver, so they take great pride in having the animal in the area.

The “Beyond dodos and dinosaurs” project will soon be advertising for a PhD student to start about January 2019 and a post-doctoral researcher to start about August 2019. Watch this space for more information and links to the job advertisements when they become available. 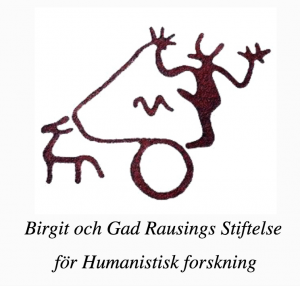