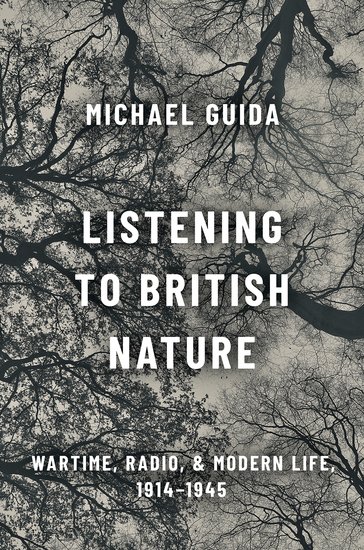 Listening to British Nature: Wartime, Radio, and Modern Life, 1914-1945 reveals for the first time how the sounds and rhythms of the natural world were listened to, interpreted and used amid the pressures of early twentieth century life. The book argues that despite and sometimes because of the chaos of wartime and the struggle to recover, nature’s voices were drawn close to provide security and engender optimism. Nature’s sonic presences were not obliterated by machine age noise, the advent of radio broadcasting or the rush of the urban everyday, rather they came to complement and provide alternatives to modern modes of living.

This book examines how trench warfare demanded the creation of new listening cultures to understand danger and to imagine survival. It tells of the therapeutic communities who made use of nature’s quietude and the rhythms of rural work to restore shell-shocked soldiers, and of ramblers who sought to immerse themselves in the sensualities of the outdoors. It reveals how home-front listening during the Blitz was punctuated by birdsong, broadcast by the BBC. To listen to nature during this period was to cultivate an intimate connection with its energies and to sense an enduring order and beauty that could be taken into the future. Listening to nature was a way of being modern.