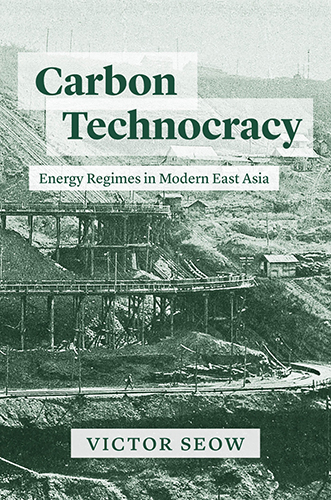 Victor Seow, Assistant Professor of the History of Science at Harvard University (USA), presented his book Carbon Technocracy: Energy Regimes in Modern East Asia (University of Chicago Press, 2022) in the Greenhouse environmental humanities book talk series on Monday, 25 April 2022, at 16:00 in Norway (10:00 Eastern in the US).

The coal-mining town of Fushun in China’s Northeast is home to a monstrous open pit. First excavated in the early twentieth century, this pit grew like a widening maw over the ensuing decades, as various Chinese and Japanese states endeavored to unearth Fushun’s purportedly “inexhaustible” carbon resources. Today, the depleted mine that remains is a wondrous and terrifying monument to fantasies of a fossil-fueled future and the technologies mobilized in attempts to turn those developmentalist dreams into reality.

In Carbon Technocracy, Victor Seow uses the remarkable story of the Fushun colliery to chart how the fossil fuel economy emerged in tandem with the rise of the modern technocratic state. Taking coal as an essential feedstock of national wealth and power, Chinese and Japanese bureaucrats, engineers, and industrialists deployed new technologies like open-pit mining and hydraulic stowage in pursuit of intensive energy extraction. But as much as these mine operators idealized the might of fossil fuel–driven machines, their extractive efforts nevertheless relied heavily on the human labor that those devices were expected to displace. Under the carbon energy regime, countless workers here and elsewhere would be subjected to invasive techniques of labor control, ever-escalating output targets, and the dangers of an increasingly exploited earth.

Although Fushun is no longer the coal capital it once was, the pattern of aggressive fossil-fueled development that led to its ascent endures. As we confront a planetary crisis precipitated by our extravagant consumption of carbon, it holds urgent lessons. This is a groundbreaking exploration of how the mutual production of energy and power came to define industrial modernity and the wider world that carbon made.